The Birthplace of Dracula. 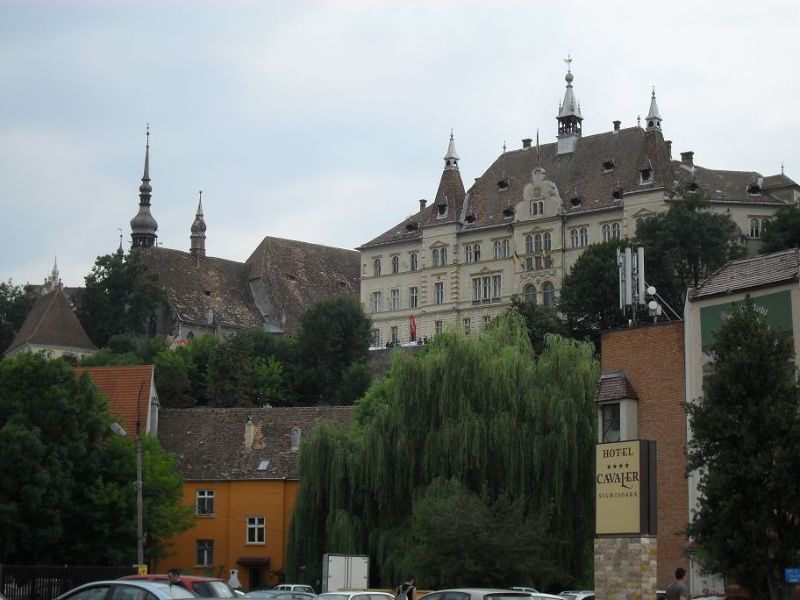 We decided to visit Sighisoara as a day trip from Brasov. It was quite a long trip for a day 3 hours to get there by accelerat style train and just over 2 hours back. We choose this style of train due to convenient departure times; leaving after 9am and returning after 7pm. We had ample time to see Sighisora and have a meal there, because the old citadel of Sighisoara is small and all the sights are close together. We did not realise that we would arrive in Sighisoara during its festival. Due to the festival we had to pay 10 Ron to enter the old part of the city, but when we got in, there was lots of festival related activity: people wandering around in medieval costumes, battles, music, food cooked in large cauldrons suspended over open fires etc. It was interesting but crowded. Sighiosara is a fortified Saxon town. Its old town is located on a hilltop and is still partially surrounded by towers, gates and walls. Its most famous building is its lovely old clock tower. Its claim to fame is that it was the birth place of Vlad Tepes; Vlad the Impaler on whom the Dracula legend is based.

The most famous building in Sighisoara is its beautiful old clock tower which dominates the town. You can climb up inside it for the view (though we did not do this). The tower itself dates from the 14th century; the clock was added in 1604. Figures emerge from the clock at midnight each night apparently. 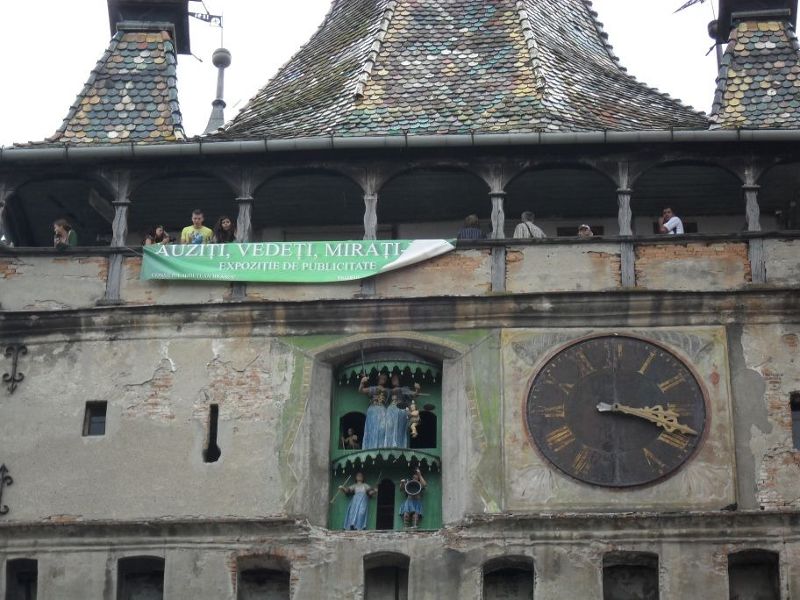 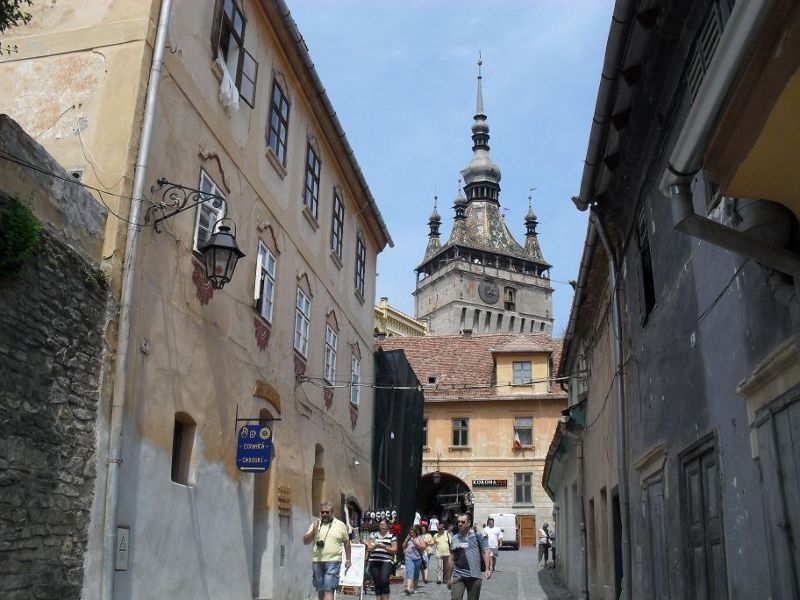 In Romania Vlad Tepes or Vlad the Impaler is a national hero who helped stem the invasion of the Turks as they expanded the Ottoman Empire. Bram Stoker is believed to have based his character Dracula on Vlad Tepes mixing vampire legend and Vlad Tepes reputation for brutality. Vlad's father was given the title Dracul meaning dragon or devil. Dracula means son of the dragon or devil. Vlad Tepes was born in Sighisoara around 1431. The building is now a restaurant. 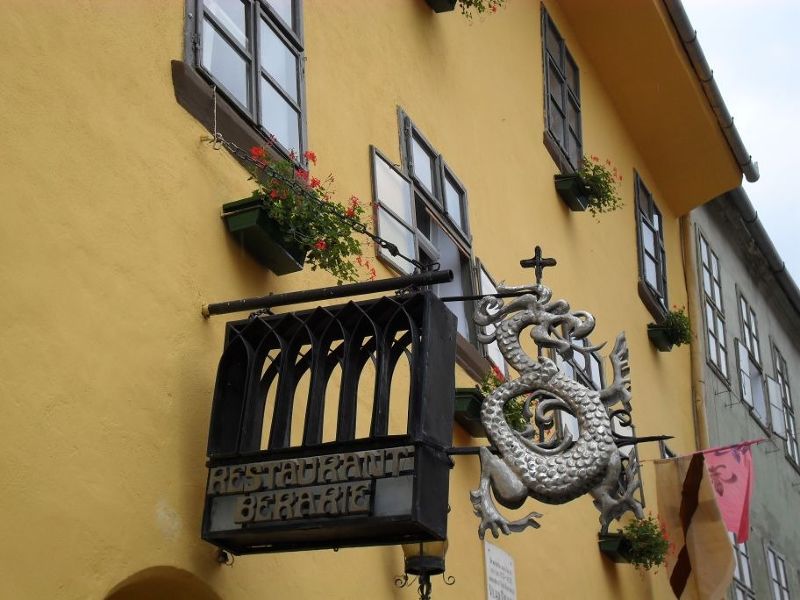 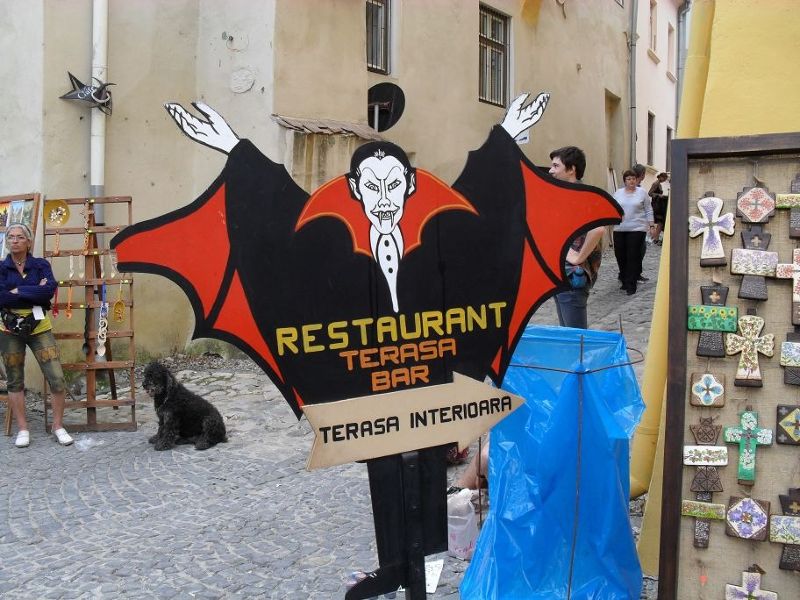 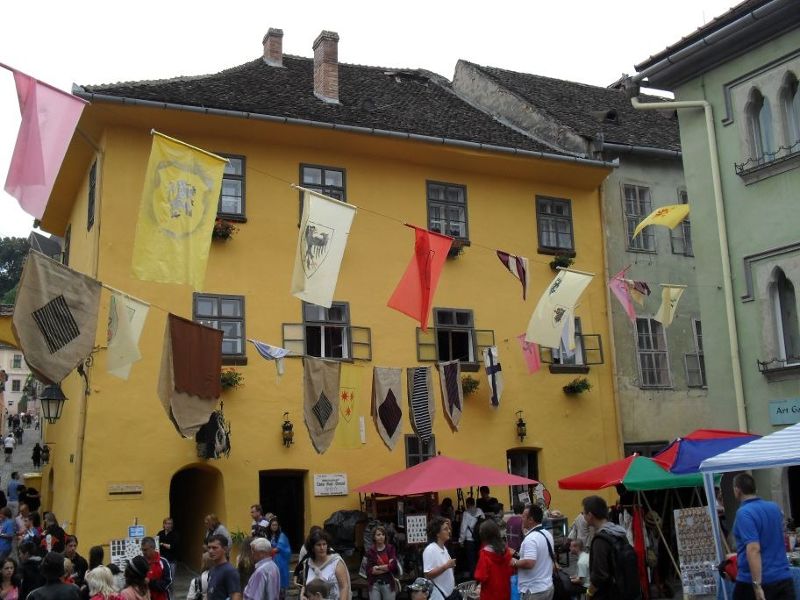 Casa cu Cerb or house with a stag.

The house with the stag is on a corner overlooking Citadel Square. It dates from the sixteenth century and is now used as a pension and restaurant. The houses name comes from the picture of a stag on its corner. 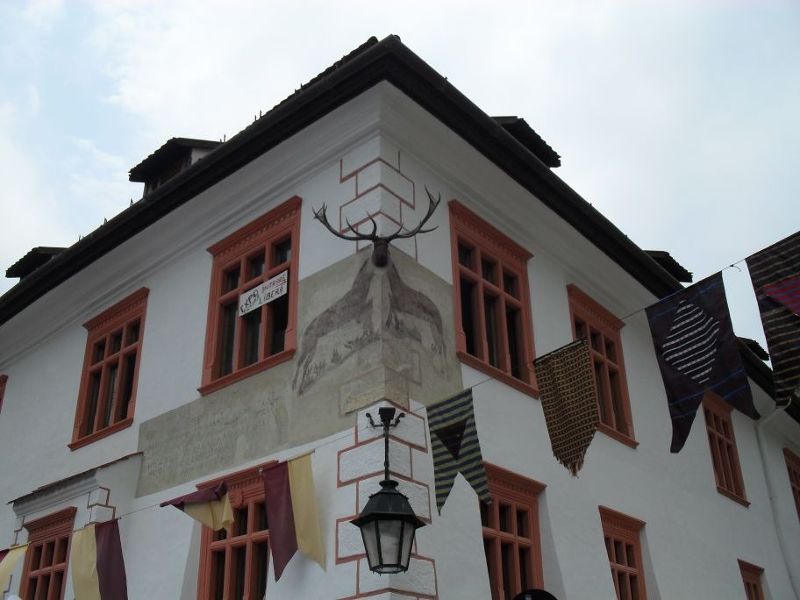 The House with the Stag - Sighisoara

Sighisoara was originally a Saxon town known as Castrum Sex Fort Six. In the fourteenth century the town was controlled by craft guilds. Each guild was required to build a defensive tower for the town and help defend the town during war time. Remaining towers include: Shoemakers' Tower, Tailors' Tower, Furriers' Tower, Butchers' Tower (now home to the custodian of the Saxon cemetery) and Tinsmiths' Tower. It is quite pleasant to stroll from one tower to the next. 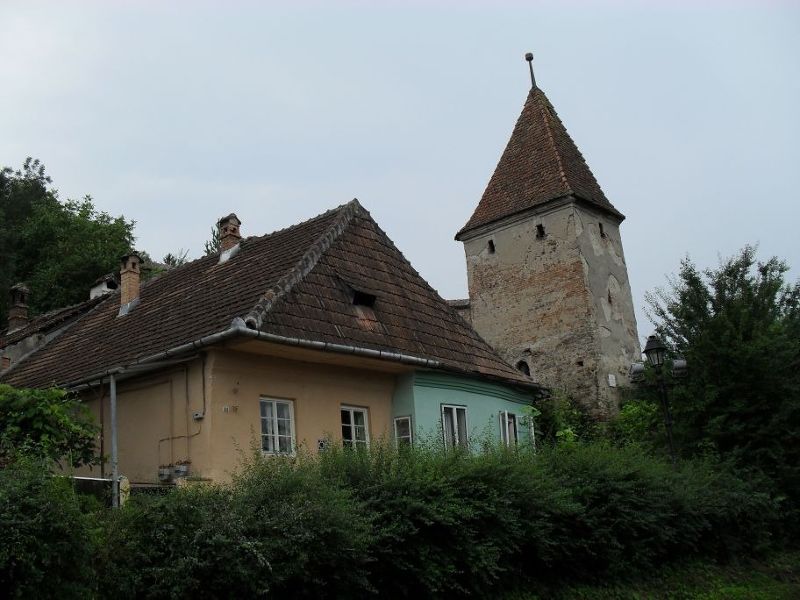 One of the old towers - Sighisoara 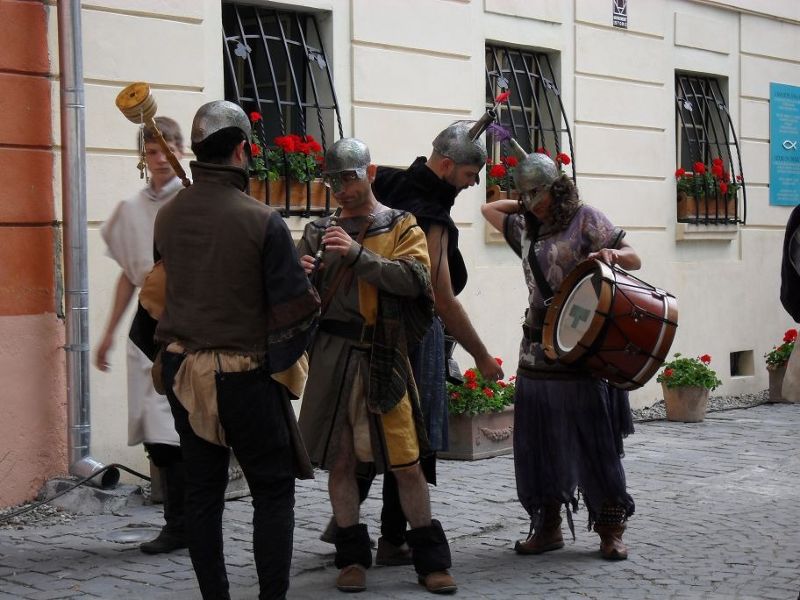 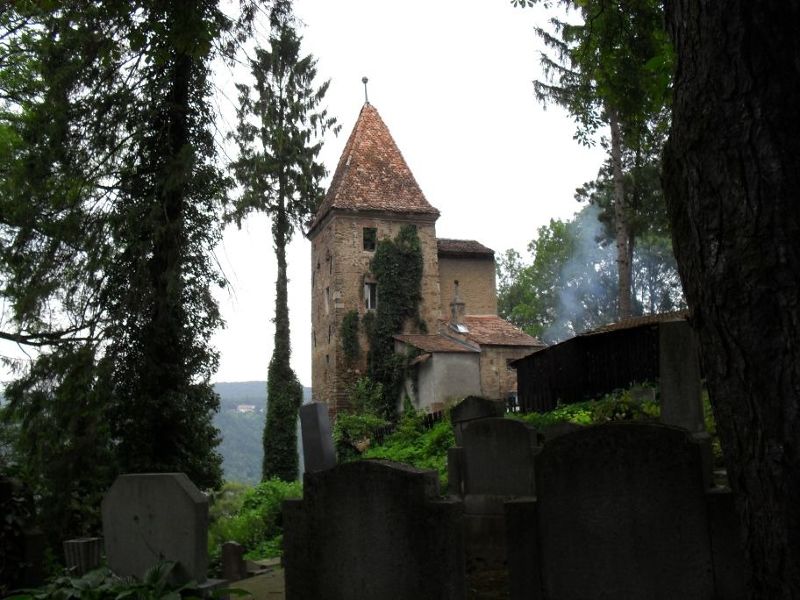 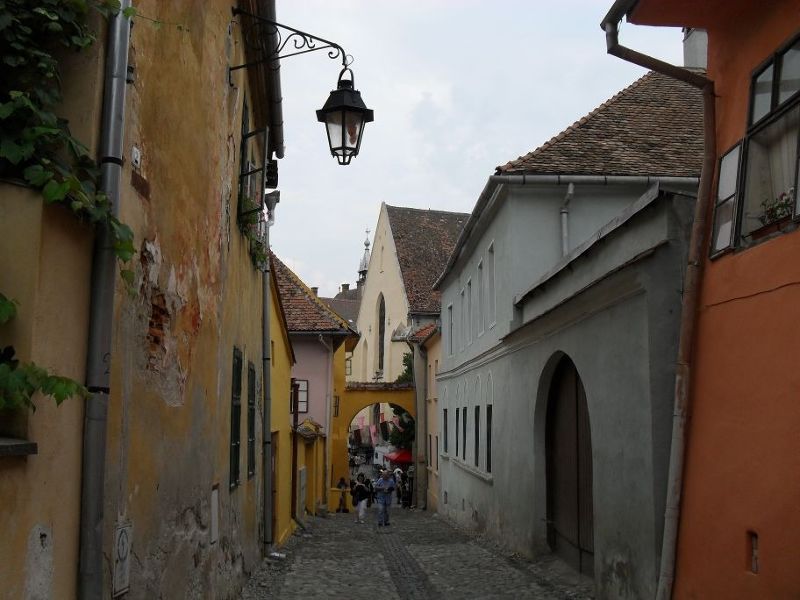 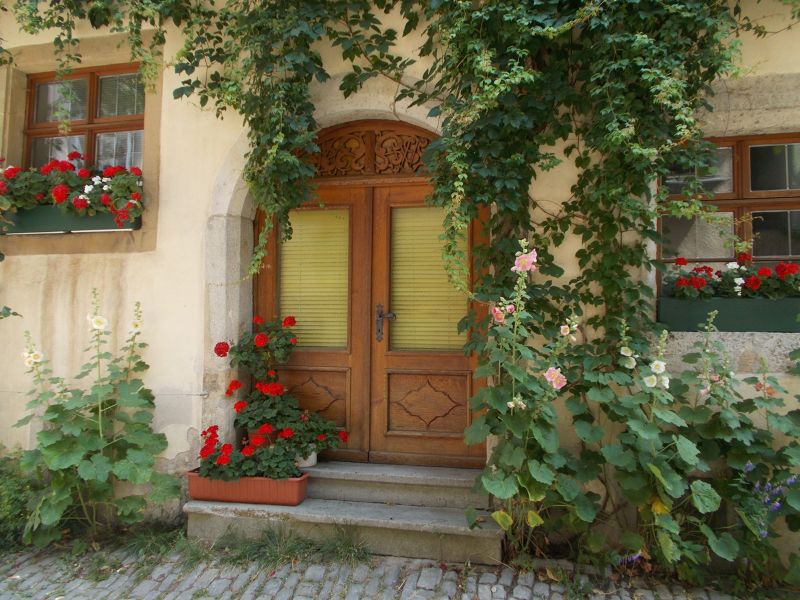 The Church on the Hill.

You can climb up to this church by roadway or by climbing the covered Scholars' Stairs a steep stairway of around 175 steps dating from 1642 and so called because it leads to the old Sighisoara school. The church on the hill is open daily from 10am to 5pm. It costs 2RON to go in. The church is a beautiful cool and peaceful place with patches of wall paintings and stairs leading down to a dingy crypt. It was built between 1345 and 1525. Opposite the church is the green and peaceful Saxon cemetery open daily from 9am to 4pm; free entry. The custodian of the cemetery lives in an odd little house located in the Butchers' Tower near the church. 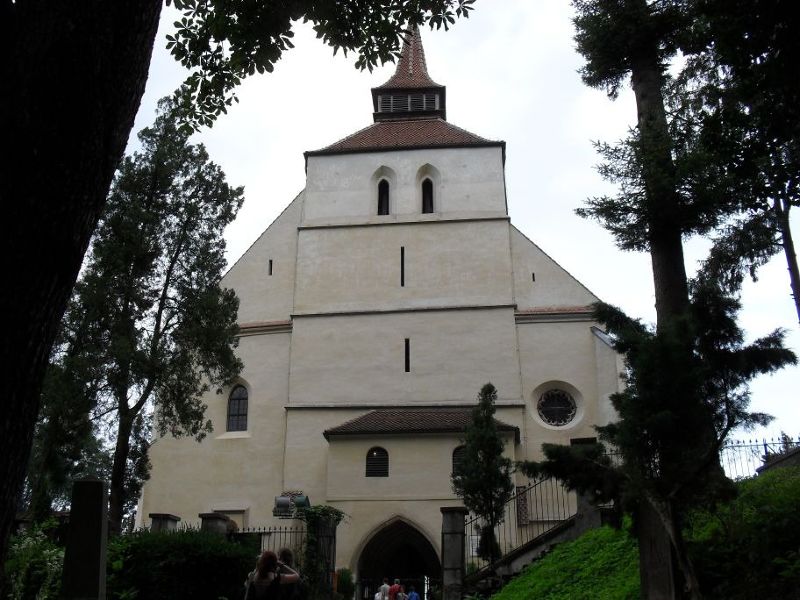 The Church on the Hill - Sighisoara

When you walk from the railway station to the old town you will pass a beautiful orthodox church located on the river. The church dates from 1937. We did not go inside. It is quite impressive from the outside. 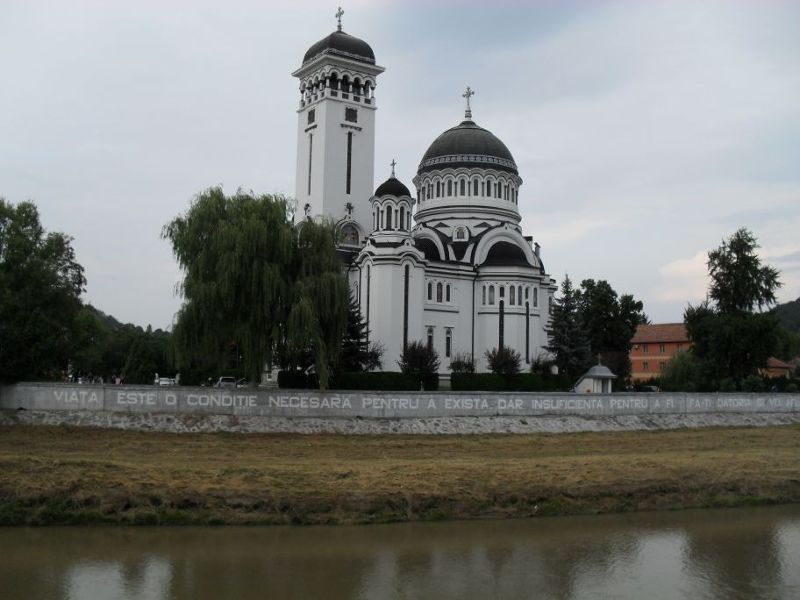 Posted by irenevt 23:47 Archived in Romania

Previous Next Table of contents

Some VTers visited Sighisoara when we had the Euromeet in Sibiu but I never made it here. It looks lovely. The towers built by the guilds reminded me of the ones in Sibiu - I had forgotten about that bit of history!

Lovely blog and photos, I stayed here 3 nights at Post Hotel. You had the crowds for the festival, i had the pupils leaving school on the Covered stairs.

If you get the chance to go it is an interesting town for a visit.

You should go if you get a chance. It is a lovely country.

Well, I am trying to build up a good itinerary to visit Transylvania in 10 11 days.

This blog requires you to be a logged in member of Travellerspoint to place comments.

If you aren't a member of Travellerspoint yet, you can join for free.