Trips to Greece when we worked in Turkey.

This is a memories page about my first trips to northern Greece when I was working in Turkey. From 1988 to 1991 I lived and worked in Istanbul. At that time, Turkey, was very bureaucratic and sorting out paperwork such as residence permits and work permits seemed to take forever. That meant that I was there only on a tourist visa while my paperwork was being sorted out and I had to leave the country every three months to get a new entry stamp in my passport. The closest country to go to was Greece, so every three months we would take a train to Alexandroupolis in northern Greece. The train journey was long and slow. Relations at the border between the Greeks and Turks were not the friendliest. All this led to long delays at Pythion on the Greek side of the border between the two countries. Our worst ever experience there was when we arrived at Pythion in the middle of the night and the engine was removed from the train. At the same time the power was cut off and the train was left overnight in pitch blackness. It was packed way beyond capacity with Greeks, Turks and many, many tourists and the corridors were filled with people. We were lucky enough to have a seat in a carriage, but before I could sleep I had to use the toilet. This involved walking along a pitch black, people filled corridor trying not to stand on anyone and trying to find the toilet in total darkness. Praying that no-one else was in the toilet in the pitch black; hoping I was peeing in the right place and hoping I could find my way back to my seat. All night we could hear the yells of people being trodden on in the dark as other people tried to move around. Horrific!

Other similar experiences include being left at Pythion for hours in the middle of winter in the freezing cold. A German tourist sharing my compartment took pity on me on that occasion and gave me some of her clothes to wear overnight. Assuming we all survived Pythion, we would eventually get to Alexandroupolis. We loved Alexandropoulis for a number of reasons. One, it was a pretty place with a lighthouse and harbour. Two, the people there were very pleasant. As well as the locals, we once bumped into a group of British teachers who were working there and
helped show us around.Three, the food was great and, best of all, they sold pork which we could not get in Istanbul. Souvlaki: pork grilled on a skewer, was often our meal of choice. We would also frequently have moussaka, salads with feta cheese, spinach and feta pie and of course lots of retsina. 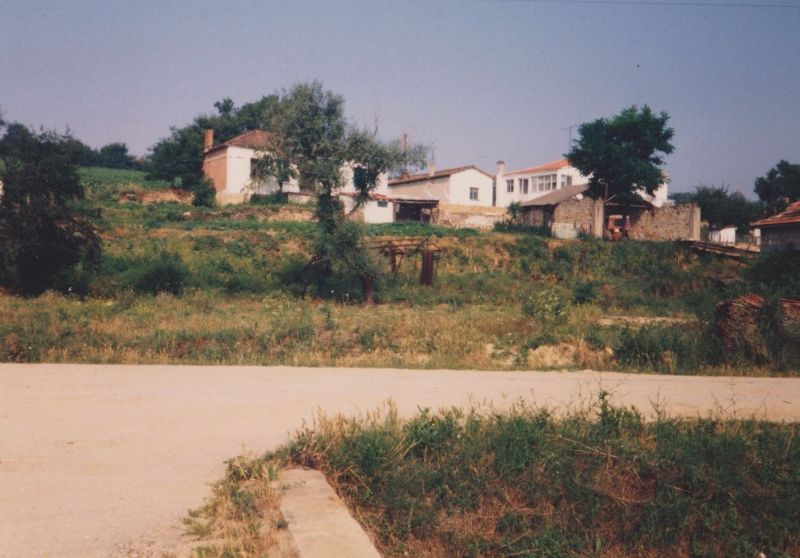 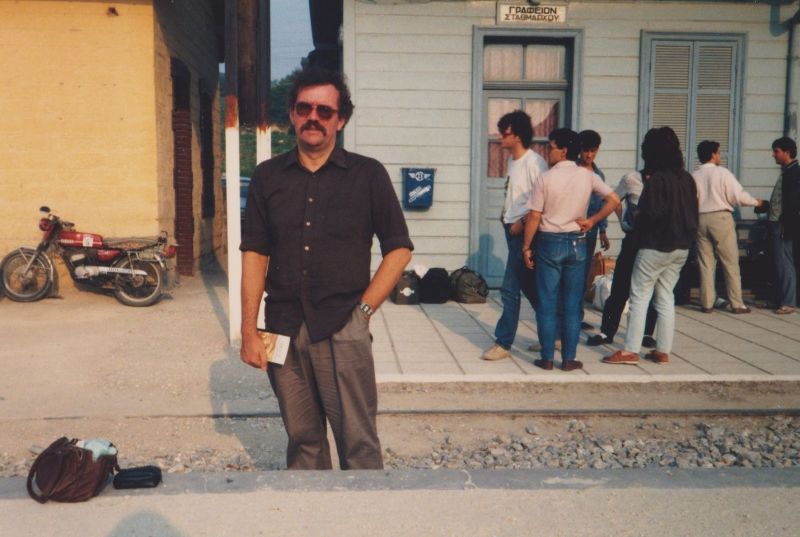 Alexandroupolis was also a place where we got in supplies such as bacon and huge tins of Nescafe which were much cheaper there than in Istanbul. On a few occasions we travelled by train all the way from Istanbul to Austria to work in the summer months. On these journeys we would stop for a day or two in Thessaloniki. On our first visit there we arrived quite late at night and though we were hungry, we did not eat anything, assuming in our ignorance that all the restaurants would already be shut. Later we learned that people tend to eat late in Greece and that when we had gone hungry to bed, the rest of the population would just have been starting to go out to dinner. 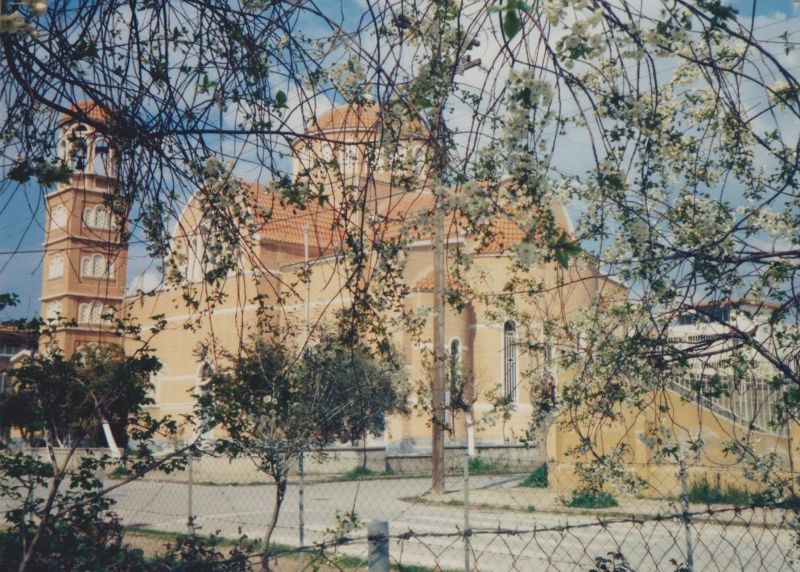 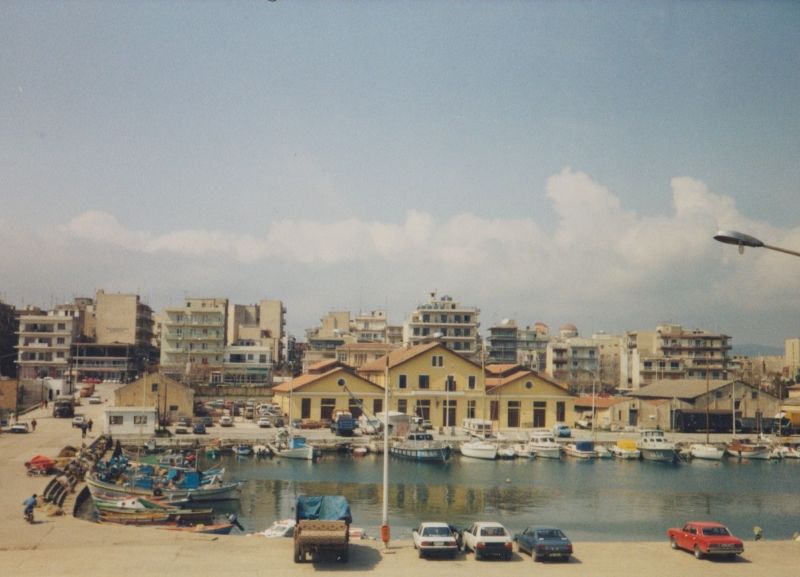 Thessaloniki is the largest city in Northern Greece. We got there by train, but probably the easiest way is by air. Macedonia airport is located 16 km outside the city. It is served by the 24hour bus line number 78 which terminates at Thessaloniki Main Railway Station. I think of Thessaloniki as one of the hottest places I have ever been as we were always there in mid summer. We would walk from cafe to cafe stopping at each one for a cooling drink. I especially remember the delicious iced coffees we used to get there. Once a waiter tripped and accidentally threw a glass of iced water down my back. He was so apologetic. I, on the other hand, was thinking I would have paid him to do it again to help me cool down. Once when we were buying supplies for our lunch by the waterfront we foolishly included a bar of chocolate. We walked from the shop to the waterfront in just a few minutes and when we opened the chocolate, it just ran off the paper. It had become liquid so quickly in the intense heat. I remember Thessaloniki's white tower and its many Greek churches many of which were being restored when we visited. 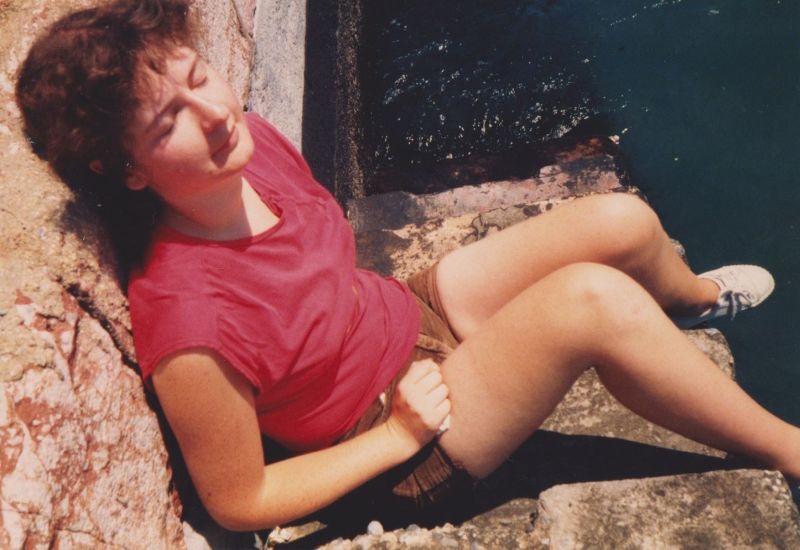 Me soaking up the sun, Thessaloniki. - Greece 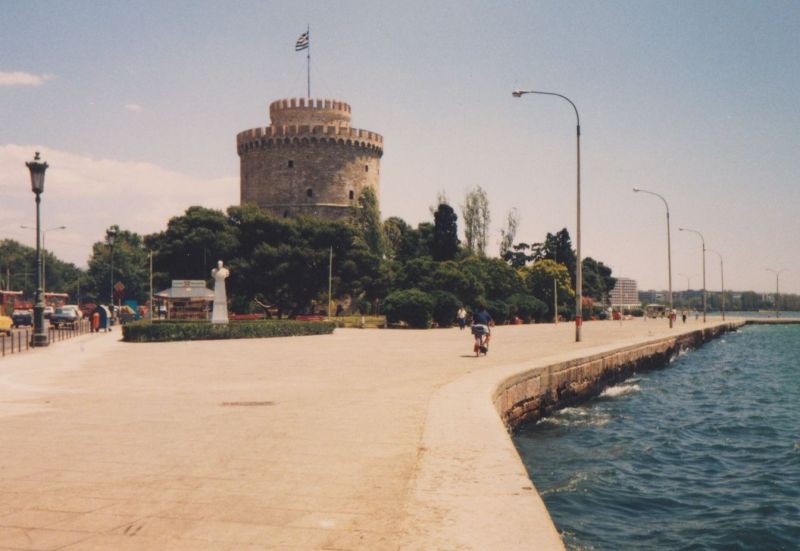 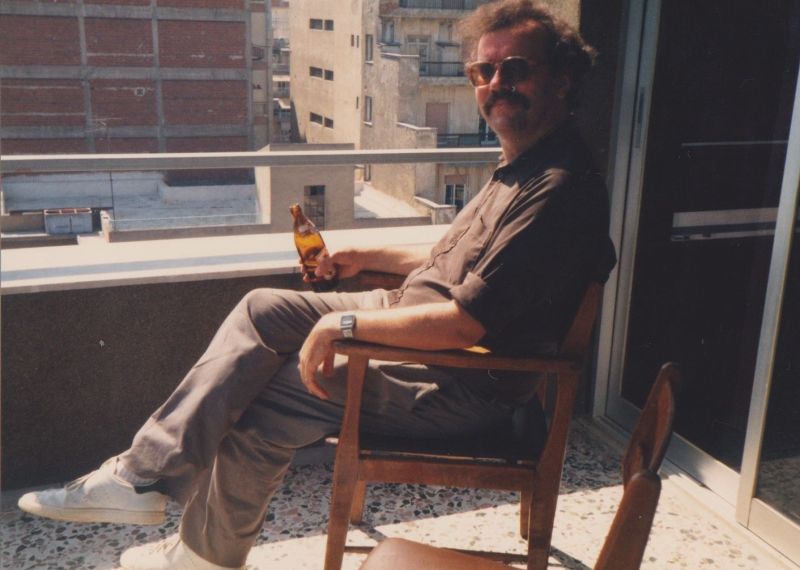 Our overall favourite place ever visited in Greece was the Island of Samothrace. We went there purely for pleasure and absolutely loved it. We booked accommodation in the main port Kamariotissa. On one occasion we travelled by bus to the town of Samothrace or Chora. We were with an English friend, Michael, whom we had met on one of our train trips from Istanbul to Alexandroupolis and whom we are still friends with nowadays. After panicking constantly that we might miss the only bus back to the port, Michael calmly said: "We are early, let's get a coffee." "No time," we said but he insisted, and so it was that we sat merrily sipping our coffees and watching the only bus back to Kamariotissa pass us by while we drank. So we had to walk back and we did walk and enjoyed it, though every car that passed us stopped and very kindly offered us a lift. We only walked because we missed the bus, but actually it was a lovely walk. The local people were so kind we had to turn down offer after offer of a lift back to the port. Our hotel overlooked the waterfront so we could fall asleep to the sound of the sea. We also very much enjoyed the ancient remains of the old town of Samothrace - Palaiopoli where we were almost the only people exploring the ruins. Each night of our stay we ate in the same restaurant and Peter and I had great food. Michael our friend is vegetarian, but eats fish. On the first night he ordered fish and the restaurant owner reluctantly served it saying he was a bit worried about the freshness. Second night Peter and I had a lovely meal. Michael had fish. The restaurant owner was quite distressed by his order saying the fish really was not very fresh. Third night when Michael ordered fish, the restaurant owner almost had a fit. It was quite funny. I think Michael ended up with chips and a salad. While we were staying on Samothrace there was a huge storm and the day we were due to leave all the boats were cancelled and we could not get off the island. I remember wandering along the front watching the huge waves. As a place to get stuck it was excellent and we were almost disappointed when the boat service resumed the next day.

When we left Samothrace, Michael stayed behind for a few more days and hired a motorbike to get around. We loved Samothrace because the locals were very friendly and there was plenty to see. We visited out of season, so it was not crowded. I have no idea if it is busy in the summer. I suspect it is a Greek island that is rather overlooked by tourists for some reason. 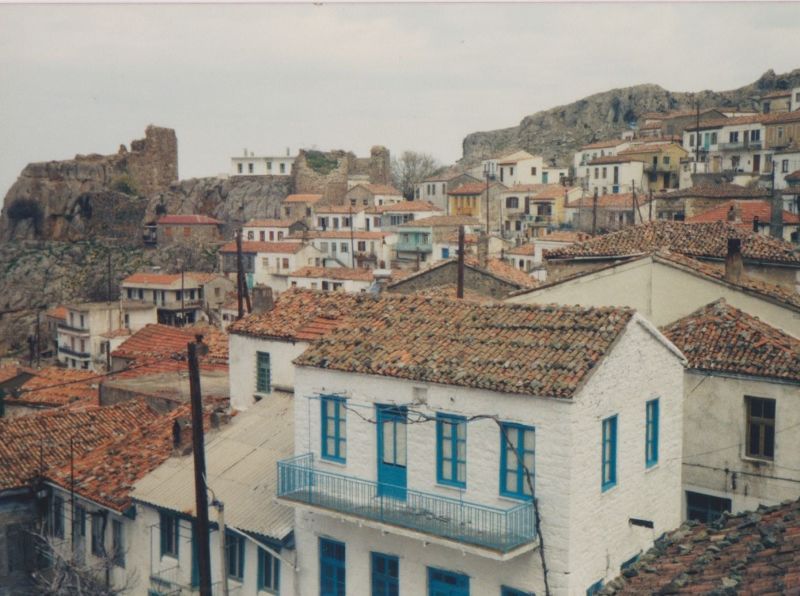 The Island of Samothrace. - Greece 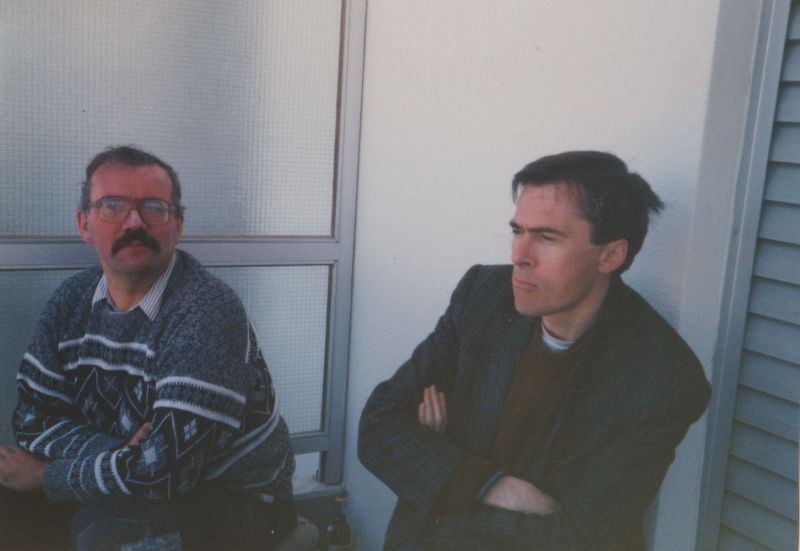 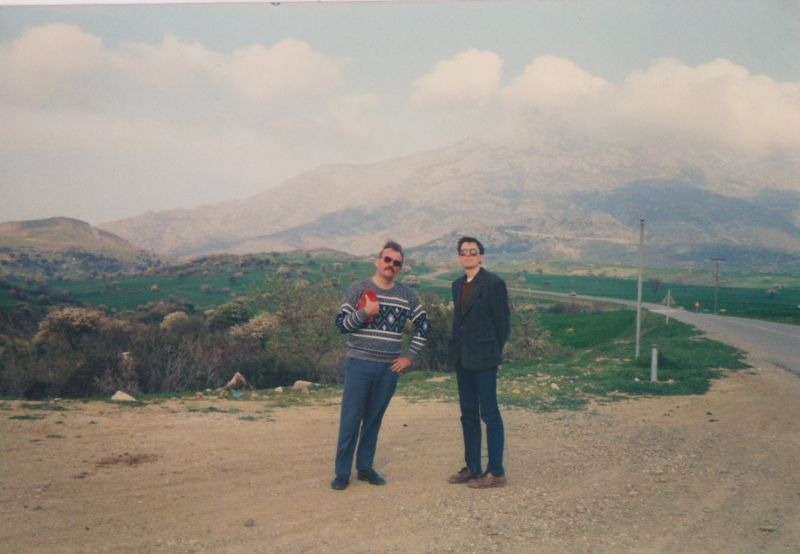 The walk back from Chora, Samothrace. - Greece 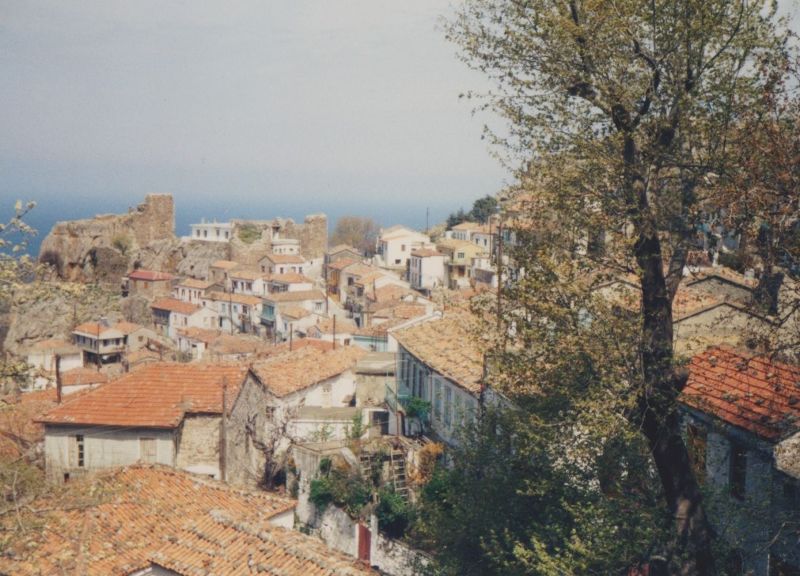 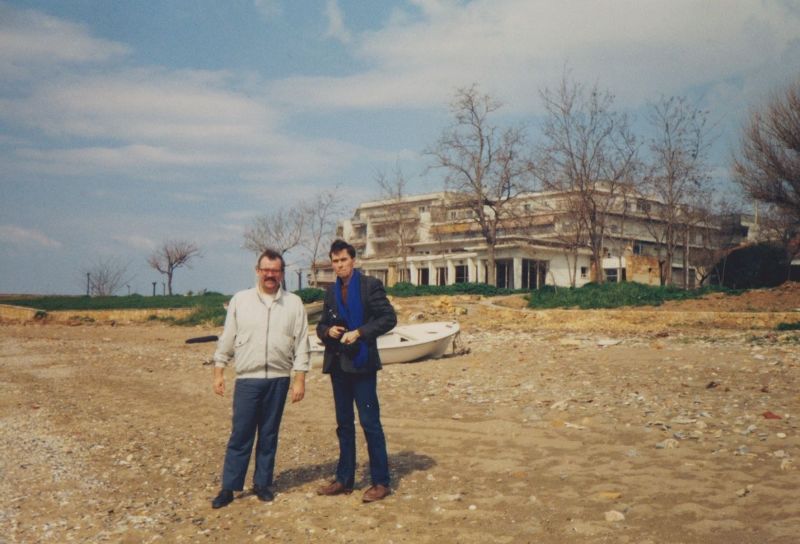 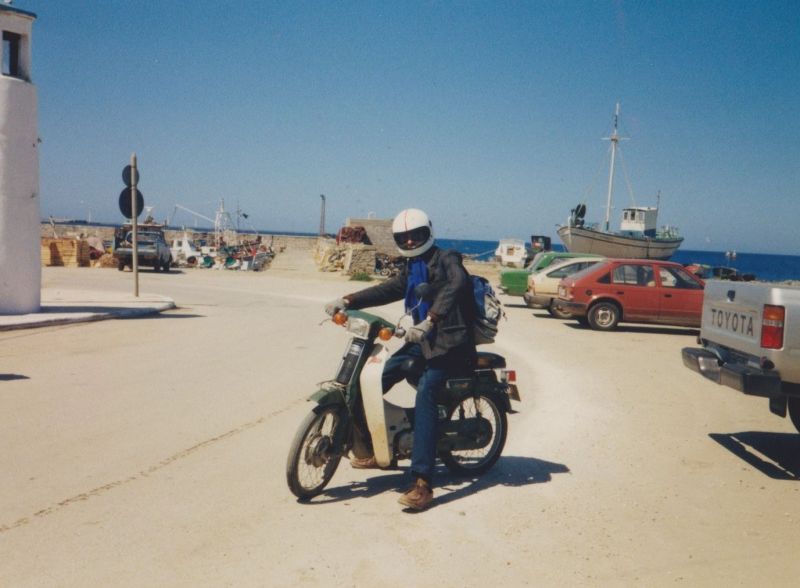 Michael and his bike. - Greece 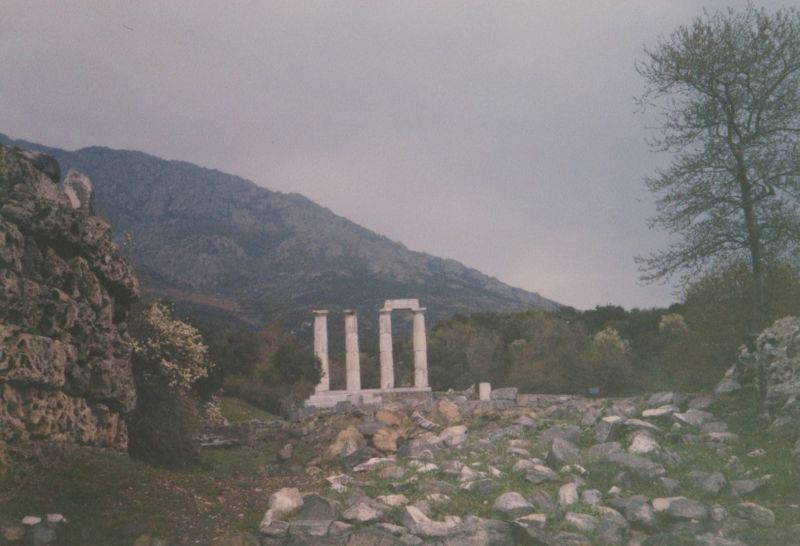 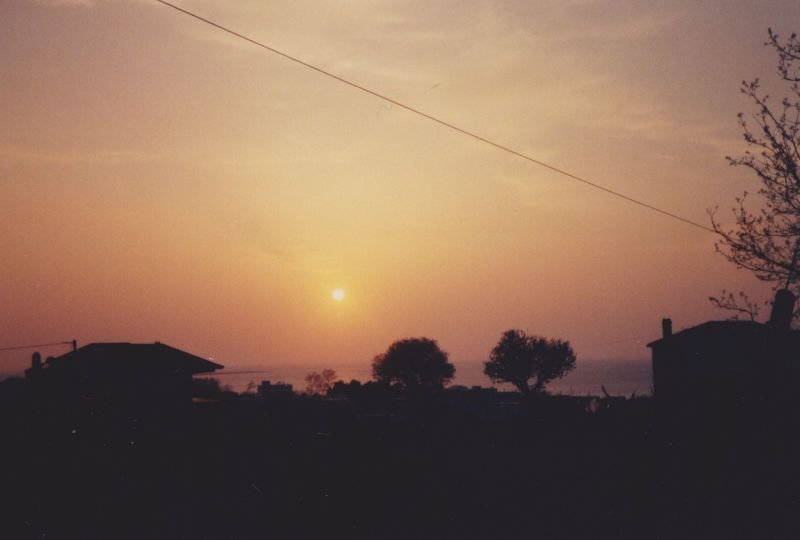 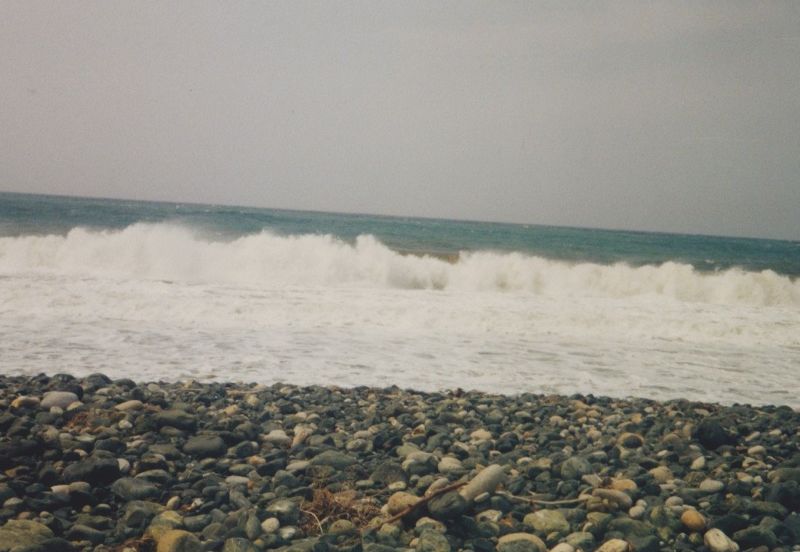 We also chose Greece for our honeymoon many months after our actual wedding. We went to the little town of Xanthi as we had passed through it on the train ride from Thessaloniki back to Istanbul and loved the beautiful whitewashed houses clinging to the hillside there. Actually these houses were the old part of the town and most of the people living there were, to our surprise, Turkish.

The only other place in Greece I have visited is Komitini. I had to go there to visit the Turkish consulate to get my work permit. I went by bus and arrived in Komitini in pitch darkness around 4am. Britain had just done something diplomatically which offended Turkish people and which caused the price of my work permit to go sky high. The Turkish official in the consulate took the whole thing out on me. He also issued me with the wrong work permit and it had to be cancelled. The whole trip was a disaster. This was my least enjoyable visit to Greece. Greece is definitely up there on our list of places we need to revisit and I would love very much to visit Athens and Crete, but having said that, I feel very privileged to have visited some of the less touristy parts of Greece. I think it gave us a different and more accurate view of the country than visiting a resort.